In this section you can set a general time limit and blocked times for the device. This limit determines how long Windows PC or the Android device of the child can be used on a day/week/month or a specific day of the week basis. Blocked Times periods are times when the device should not be used at all.

Lock/unlock for given time

Enter time limits in the format hh:mm (hours:minutes) or use the arrows for increase/decrease. For Device Blocked Times, please click on the respective box in the table below to allow (green) or block (red) usage. During operation, the user will be notified before a locked hour that the hour has been locked by you (see also "Settings", "Warnings"). To select several boxes at once, simply hold down the left mouse button and mark the area. When the area is marked correctly, press the right mouse button. Select the "Reset" button to cancel all selections. Tip: You can also set lockout times (red/green boxes) to quarter hours. To do this, simply click on the corresponding box with the right mouse button.

Important notice: Its possible to combine all limits. Please note that the shortest limit is in effect. So you can set a daily limit of two hours, but a maximum of only ten hours per week (instead of the calculated 14 hours). You can also specify that this limit applies, but that the PC may not be used after 8 pm. As you can see, there are almost no limits to possible limit settings. In Settings section you can also define what should happen after the limit expires. Possible choices are to shut down, log off or allow only certain released programs (so that the pre-cable program can still be operated even if the time has expired). The limits shown here apply to PC use, i.e. how long the PC is switched on. The same settings are also possible for the Internet time under Internet Limits and for programs (see Apps/Programs) and web pages (see Web Filter). On Android devices there is no Shutdown option. Instead the Block screen will be displayed is a limit has been reached.

The shortest limit applies! You can also combine different limits. For example, you can specify that the PC may run for a maximum of 7 hours a week, but on no day for more than 1:30 hours. Also in this case the shortest limit applies, i.e. after 7 hours of running time per week the quota is used up. If you only want to define a weekly limit of e.g. 10 hours and leave the daily usage open, then enter 10:00h as the weekly limit and 10:00h as the daily limit.

You can specify that after a certain period of use, a pause defined by you must be taken. When the time has expired, a lock screen appears, indicating when the device can be used again. You can optionally specify whether you want to allow extensions for pauses. (Note for Windows: You can find these settings under Device Limit -> Special Limits). 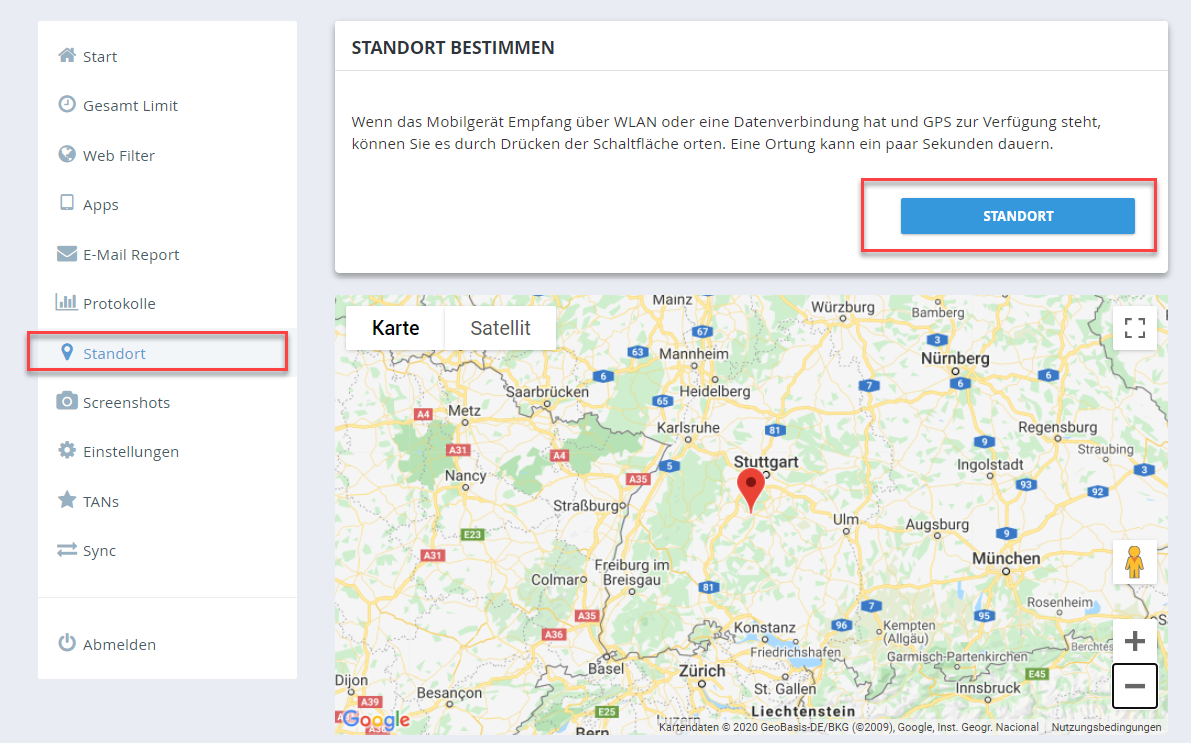 Apps that you have set as "Allowed" with the option "Counter Stop" or the option "Bonus" are excluded from the pause count. Voluntary breaks are recognized by the system and the time is counted accordingly. Example: You have specified that after an hour, a half-hour break must be taken. If the device is now used for an hour starting at 12:00, a break must be taken at 13:00 until at least 13:30. However, if the device is only used from 12:00 to 12:30 and is only switched on again at 13:00, the break is not due until 14:00 (from 12:30 to 13:00 a break has already been taken, which the system has counted towards this time).

If you want to completely reset already counted times for the pause, deactivate the pause function and switch it on again a little later (after a sync, about 3-5 minutes). Alternatively, you can also reset all counted times under Usage Logs.

With TANs you can assign an extension to a voucher code (similar to a TAN). Use the roaming feature to count times across multiple devices.

Lock/unlock until a given time

Should your child not use the PC for the next three days because of urgent school matters? Or is it vacations and you want to disable Child Control for a week? Use this function to either completely lock or completely unlock the PC until a certain date.

This setting takes precedence over all other time limits and is not combined (i.e. if you unlock, no other locks take effect, if you lock, available time is not usable).  Select the appropriate option in this section and enter the corresponding date.

Here you can see a list of your always allowed apps. How to permanently allow apps and programs (i.e. even after time expiration) is explained under section Apps/Programs -> Always allowed. Use Web Filter with access level Allowed PLUS to always allow specific domains.